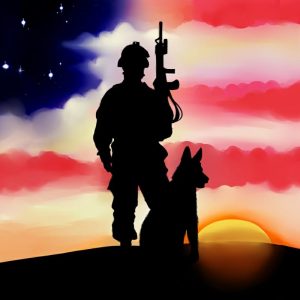 Veteran advocacy is a passion for Joshua Hosler. That is why he and his fellow Veteran Anthony Archer founded Veteran Sheepdogs of America.  As disabled Veterans, they both have personal experiences within the VA system and recognized a gap that needed to be filled.

Joshua served as an assistant platoon leader and bomb dog handler in the Marines. While he never had plans to enter the political arena, some of the things he saw overseas inspired him to get more involved when he left the Corps. “Seeing what the Afghani people felt after voting for the first time in their life, it was very hard not to be moved by that.”  He worked on a couple of political campaigns and briefly worked as District Director for Colorado Congressman Doug Lamborn before founding Veteran Sheepdogs of America.

We discuss some of the advocacy areas they are focusing on including the 352,000 Veterans whose compensation and benefits exams are backlogged due to COVID.  Other examples include the case of Richard Stayskal, a Veteran with Stage IV cancer who would have a strong malpractice case in the civilian world but was prevented from seeking compensation due to the Feres Doctrine.

Veteran Sheepdogs of America is a membership based organization.  This is by design as Joshua knows from experience that elected officials have higher respect for organizations whose members have financial skin in the game. Membership is also open to civilians and is only $10.

Lastly, Joshua and I share our thoughts about the importance of having more Veterans seek public office. In 1973 nearly 3 out of 4 members of Congress had some type of military service. Currently that number is closer to one in six.

The concept of using the term “Sheepdogs” to describe our military and first responders was first referenced by Lt. Col. Dave Grossman in his book “On Killing”.

TAKEAWAY: “Anyone who supports our mission and supports Veterans is welcome.”