The story of Richard Stayskal is by no means complete. The ending remains to be written. He survived a snipers’ bullet but is now fighting for his life against cancer and the bureaucracy. 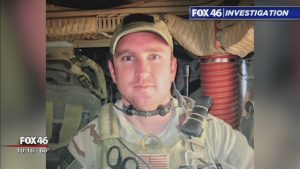 We need YOUR help to write the ending to this story.

I take pride in show prep.  I read books before having authors on the show. I watch documentaries before we feature their producers. And, on occasion, we reject guests because they just don’t fit.

But sometimes the best laid show outline doesn’t survive first contact with the guest. This turned out not to be the show I wanted to do but a show I am very proud of.

Scott Huesing is a 24 year Veteran of the Marine Corps and the author of the best-selling book “Echo in Ramadi”. He WAS the perfect guest for a Marine Corps birthday/Veteran’s Day show.  And then, at the last minute, he asked me to have Richard Stayskal on the show as well.

Rich is a Warrior and a survivor. But somewhere, an Army hospital dropped the ball. And that meant potentially survivable cancer is now stage IV.  This would be an egregious case of malpractice in the civilian world and remedies and relief for Richard’s family would be available.

However, due to a 60 year old policy called the Feres Doctrine, Rich – and others like him – are prevented from seeking justice simply by the fact that they…took an oath…to defend our nation.  Let that sink in. By volunteering to defend OUR rights – members of the military apparently sacrifice THEIRS.

TAKEAWAY: Richard is a living example of the best in our military tradition. While fighting for his life against cancer, he is still leading…still looking out for his brothers.