The Warrior Tradition is a PBS documentary that features more than a dozen Native American Veterans from all branches of the service. Per capita, more Native Americans serve our nation in greater numbers than any other ethnic group. Over 12,000 served in the First World War, even though many were not granted US Citizenship until 1924. 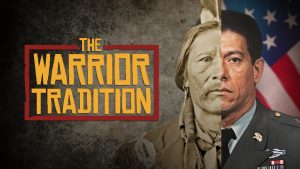 Lanny Asepermy served 24 years in the Army and saw combat in Vietnam. He is Comanche/Kiowa, both tribes with a strong warrior tradition. However he says “When we were put on the reservation we were no longer warriors.” He then recounts how military service allowed them to be warriors for a while but when the wars were over “We were no longer warriors again.” The Comanche Indian Veteran’s Association has documented 1,259 known Comanches that have served our military with honor tracing all the way back to the Indian scouts.

Following on a theme presented by combat journalist Sebastian Junger, we discuss the “cleansing traditions’ practiced by many tribes to prepare their warriors for battle. The Warrior Tradition documentary features a powerful scene where non-native members of the deploying unit were invited to participate in the ceremony. Lanny credits his grandmother’s blessing for carrying him safely through his Vietnam service.

Lanny shares some lighthearted insight into assumptions made about Native Americans in uniform. When he was a lead tank commander in Vietnam, his fellow soldiers assumed he always knew where he was. He says “Yes, I knew where we were at and where we were going…but because I had a compass and a map!”

He shares that it is a point of pride for him that the Army names many of their aircraft after Native American tribes.

TAKEAWAY: When I asked Lanny why he enlisted he replied “We lost our land once..we’re not going to lose it again.”