Sheriff Mark Lamb has twice been elected Sheriff of Pinal County, Arizona. Pinal County covers 5,374 square miles and is larger than the States of Connecticut, Delaware and Rhode Island. As elected, rather than appointed law enforcement officials, the office of Sheriff is rather unique. 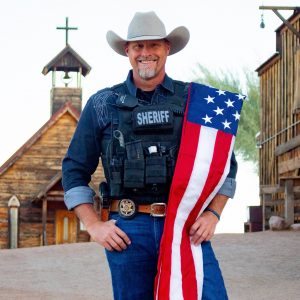 His agency was one of the jurisdictions featured on the Arts and Entertainment channel program “Live PD”. Sheriff Lamb was approached about co-hosting a spin off series called “Live PD: Wanted”.   He says he agreed to appear on the program because “There are so few opportunities to showcase the good men and women who put on the badge every day.”  While Sheriff Lamb does not know if the Live PD shows will return, he is working on putting together a show of his own.

Sheriff Lamb believes that support for law enforcement remains high nationwide but the actions of one bad officer can negatively impact agencies across the country. This is why he emphasizes regular community engagement as a high priority for his department. His agency has lots of volunteer opportunities including a Citizen’s Posse and helping on cold case files.  He also takes pride in an initiative that provides early diversion opportunities for youth offenders.

Sheriff Lamb regularly patrols with his deputies because they need to know that leaderships stands shoulder to shoulder with them during these times, particularly in a media environment quick to judge.  “We are at a disadvantage because it is our responsibility to be respectful of the law and work toward securing a conviction. “ He says that COVID has also created more public safety issues as well as public health issues.

TAKEAWAY: “I view positive community engagement like a bank account; you have to constantly build your community trust accounts because when a withdrawal comes, it is going to be heavy. If you haven’t built enough trust, that check is going to bounce.”