Rita Cosby is one of the most respected broadcasters in America and an ardent advocate for our military and Veterans.  She has practiced her craft as both a radio and television host and has been recognized with THREE Emmy Awards – the highest recognition for excellence in the broadcast industry. 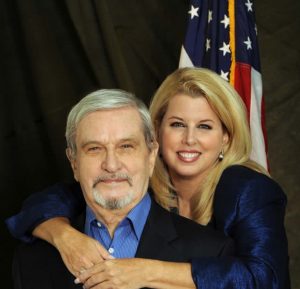 While she has interviewed over twenty world leaders, entertainment icons and even a serial killer, her greatest interview may have been with her own father. As a child she noticed that her father Richard had scars “etched like cracks in dried mud.” Her mother simply said “we don’t talk about it.” Cleaning out possessions after her mothers’ passing, she discovered a tattered suitcase that contained a bloody red & white Polish armband and an ex-POW card. Rita says this started the greatest story of her life.

As a teenager her father was part of the World War II Polish resistance that fought for their freedom against overwhelming odds.  He fought in the Warsaw Uprising and endured the horrors of a German POW camp. Rita tells his incredible story in her book “Quiet Hero: Secrets From My Father’s Past”.

Rita was recently named Chair of the Global Service Institute. This innovative initiative seeks to create “generations of greater good” by inspiring people to serve in their communities. The institute has a free app that directly connects volunteers with charities in their area. Rita encourages both non-profits and volunteers to register for the app and explore their virtual speaker series featuring leaders from around the globe.

Rita was also recently involved in a campaign to finally secure recognition for the unsung heroes of the Merchant Marines.

TAKEAWAY: “There are millions of people around the globe who everyday are praying that they come to a riverbed with GIs on the other side. This beacon on the hill..this incredible thing that IS America.”