Stalag 17B was “home” for B-17 radio operator Walter Ram for two years. Stalag 17B was one of the Nazi regime’s most notorious POW camps. 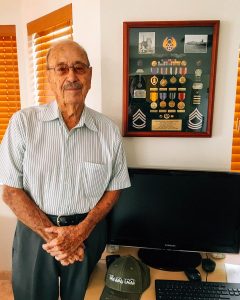 Walter lied about his age in order to enlist at the age of 16. One year later the Japanese attacked Pearl Harbor. His crew was assigned to the 94th Bombardment Group, 331st Squadron of the 8th Air Force.  He shares the humorous story of how his aircraft, the “Helno-Gal” came to be named.

On his 3rd mission, his aircraft had an engine shot out and soon lost a second. Flying unescorted across the North Sea with no land in site, the pilot asked the crew if they wanted to bail out but they all refused. Luckily they were able to “belly” land with minor cuts and scrapes.

The “Helno II” was not so lucky. On their 6th mission the plane was badly damaged and 6 crew members were killed. Walter credits ball turret gunner Chuck Lewis for saving his life by throwing him out of the plane. Lewis did not survive.

As it became apparent that the Nazi’s were about to lose, Hitler issued orders that all POW’s were to be executed. This was one of the few orders that German Generals ignored. Instead, Walter and 4,000 of his fellow Stalag 17B POW’s were forcibly marched toward the US lines. Walter will never forget the site of some of the Jewish prisoners they encountered during the march.

They were eventually liberated by troops of Patton’s third Army but because Patton’s men had no way to care for them, they were left on their own for a few days. This resulted in Walter and his comrades taking some rather unusual revenge on the building that was Hitler’s birthplace.

TAKEAWAY: “I would like to have the young people in this country know more what it is to keep our freedoms because we paid a high price for freedom and it wasn’t in dollars and cents.”