“Three Wise Men” tells the story of one family’s extreme sacrifice during the longest sustained period of conflict in our nation’s history. All three Wise brothers enlisted. Jeremy became a Navy SEAL, Ben a Green Beret and Beau a Marine. Together they would spend 1,600 days deployed in Iraq and Afghanistan. Both Jeremy and Ben would be killed in action, triggering the Department of Defense “Sole Survivor” designation for youngest brother Beau. 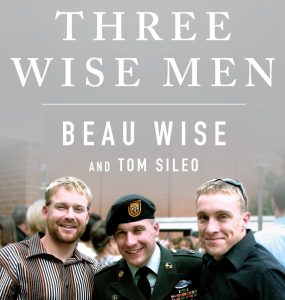 The Fog of War is a recurring theme in Three Wise Men, including the situation that led to Jeremy losing his life. The December 30, 2009 suicide bombing at Forward Operating Base Chapman in Khost, Afghanistan would become the CIA’s second highest single day casualty event in the agency’s history. Jeremy would be awarded the CIA Intelligence Star.

Returning to combat following Jeremy’s funeral, brother Ben would pray “Lord please keep us safe. Not for me but for the people who care about me. What happened to Jeremy can never happen to my family again.”  But tragedy would call upon the Wise family one more time.

While pursing high value targets in Afghanistan’s Balk Province on January 9th, 2012 Ben would sustain serious wounds. He died Jan. 15 at the military hospital in Landstuhl.

At Ben’s funeral, Marine Corps Commandant General James F.  Amos told their grieving mother “Mrs. Wise, you have my word that Beau is not going anywhere for a long, long time.”

While Beau says that in retrospect the Corps’ decision was the right one, it became apparent over time that his career as a Marine was effectively over because he was prohibited from going into combat. Beau found himself wondering how he would deal with the loss of two brothers without his own Marine brotherhood.

TAKEAWAY: “People will see the title of the book and think the third Wise Man is me, but it’s not, it’s my Dad.”