Save the Brave – Scott Huesing

Save the Brave – Scott Huesing

Save the Brave Executive Director Scott Huesing was asked to give the eulogy at the memorial service for David White, a high school friend and Navy Veteran. David drank himself to death. 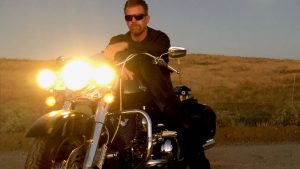 Rather than fly cross country, Scott decided to undertake a 4,600 mile roundtrip motorcycle journey in order to honor David, raise awareness about the Post Traumatic Stress issues still bedeviling Veterans and raise funds for Save the Brave programs that help address this issue. Scott has never ridden that far before and admits to being nervous. Fellow Veteran Pete Turner offered to drive his truck as escort.

Scott emphasizes that isolation most likely was a contributing factor to David’s drinking and depression problems. With the COVID quarantines and social distancing it is more important than ever for people to reach out to those who may be at risk for depression.

Scott has been inspired and humbled at the number of persons who have come out to support the cause – a few have even ridden along for segments of his journey. People Scott has never met have opened up their homes and businesses to him.

The Save the Brave Foundation is a non-profit formed by several Veterans when they lost one of the squadron leaders to suicide. Their mission is to provide camaraderie and stress management through a variety of outreach programs. Eighty three cents of every dollar raised goes directly to supporting Veteran’s programs.  Eventually Scott would like to expand their programming to include families.

Scott served 24 years with the Marines. He had 10 overseas deployments and hundreds of combat missions. He recounts some of his experiences in the best-selling book Echo in Ramadi.

TAKEAWAY: “For anyone dealing with stress out there – I beg them please don’t even think about killing yourself because it leaves a massive wake of destruction and sadness behind.”