Richard Burt, like many of his generation, volunteered when our nation entered World War II.  The Army decided he should be trained as a “Latrine Technician”.  However, recognizing the positive morale building effects of music, the Army also was standing up nearly 500 bands and this proved Richard Burt’s ticket out of permanent latrine duty. 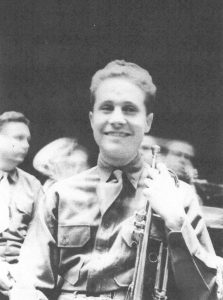 Burt was a very talented trumpet player and volunteered to deploy to the Pacific with the 746th Far East Air Force Band so that the married soldiers on the list wouldn’t have to.  The 746th Band performed parades, ceremonies, concerts and USO shows – many of them very close to combat. Following Japan’s surrender and just before the band was to be disbanded, the group decided to record several songs on a wire recorder from their performance tent in the Philippines. Burt brought those recordings home after the war and had a local radio station transfer them to 76 RPM vinyl records.

This musical legacy of Richard Burt would have been lost for all time if not for the efforts of Richard’s grandson Jason. Jason is a history teacher and has a particular fascination for World War II history. Following Richard’s death, Jason discovered these records in his grandfather’s attic and was inspired to preserve this musical legacy. He contacted the Grammy Award winning studio Larssen Mastering and they agreed to remaster the music for re-release.  In addition to getting recognition for a generation we are losing every day, the initiative will also raise funds for the USO.

Jason gives American Warrior Radio listeners a special treat by allowing us to play some of the original music and even a recording of Richard himself describing what it was like to perform so close to the front lines of combat.

TAKEAWAY: “You can find plenty on the Glenn Miller’s of World War II but you can’t find any recordings of a front line Army Band who was overseas and actually in the War. This is pretty rare.”