Break It Down Show – Pete Turner

Break It Down Show – Pete Turner

Break It Down Show producer and host Pete Turner refined his cultural skills in “some of the most harsh work environments possible” – Bosnia, Iraq and Afghanistan.  He served over 70 months in combat zones as a counterintelligence specialist for the Army, Department of Defense and State Department. 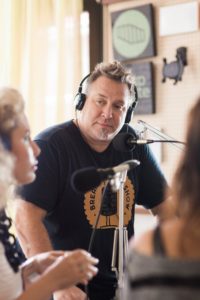 His primary job was to be outside the wire “..trying to figure out what was keeping us from winning.”  Because he was able to develop relationships with unique assets in these combat zones he was able to discover what he calls the “unknown unknowns”; questions that no one else even knew to ask.

Like many Veterans, Pete struggled making the adjustment from a high adrenaline military career to civilian life. Despite extensive experience and a sterling resume, Pete found himself unable to even secure interviews in the private sector. He went from advising commanders of thousands of persons in a combat zone to working as a handyman. He felt untethered financially, professionally and emotionally.  He says this lack of relevance in his life almost killed him.

Ultimately he concluded that his best course was to go out and blaze his own path as an entrepreneur.

Pete shares his theory of “ethical saturation” and perspective on how American arrogance and ignorance of cultural factors can impede our success…or worse. He cites a specific example where his recommendations were ignored and resulted in the death of a State Department employee.

Pete has been in the room when “validation packets” are reviewed and approved and shares some intriguing insights into the current situation with Iran.

The Break It Down Show gathers perspective offering a collection of stories about music, performance, art, culture, conscious and combat – LIFE. In addition to his Break It Down show, Pete helps others produce podcasts including “Green Zone Hero” and “Task Force Zen”.

Pete believes that if you are an adult and are in a good position, you need to find a charity that you actively support. Pete’s preferred charity is Save the Brave.

TAKEAWAY: “Value is not just money. Success is having more joy and giving other people joy.”