Echo in Ramadi is definitely NOT your typical book about war.  Instead, author Scott Huesing wanted to give readers a look into the power of human connection and brotherhood that allowed his company of Marines to fight and win in one of the deadliest regions on the planet. 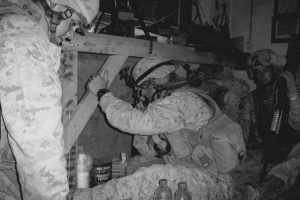 Scott served a total of 24 years in the Marine Corps, both enlisted and as a commissioned officer.  Echo in Ramadi gives a firsthand recounting of his time as commander of the 250 Marines of Echo Company, 2d Battalion, 4th Marines during the 2006 “Surge” in the Al Anbar province of Iraq.  They were engaging in combat day in and day out, sometimes in 4 – 5 firefights each day. “It was extremely challenging to fight among the civilian populace where the front line was everywhere.”

We begin our chat by putting the battles in the context of cities with ruined physical infrastructure from constant war and a broken system of governance. “The city was literally chewed alive from years of fighting.”

Several themes throughout Echo in Ramadi give civilians a powerful perspective on how real combat is different than what we often see in movies. These include the “friction” of war – when things don’t work or go as planned and the rules of engagement that led Scott to order a raid on three mosques being used as weapon stockpiles and staging areas for insurgent attacks.

Appropriately, the book also reinforces the idea of the bond between the Marines, allowing us to get to personally acquainted with some of the Marines AND their families back home. A particularly touching chapter introduces us to “Angel Flights”, the airlifts that bring home the bodies of fallen warriors with abiding respect.

A portion of all book sales are being donated to Save the Brave.

TAKEAWAY: “The lens that I viewed it through as a 25 year old commander was vastly different from those 18 to 20 year old Marines. The things I was asking them to do, in the face of great danger…they never let me down. That is why it s such an honor for me to share their story.”