Cairo – No Ordinary Dog with Will Chesney

Cairo – No Ordinary Dog with Will Chesney 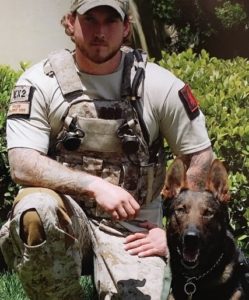 Cairo was a very special dog for many reasons – not the least of which was the fact he was part of the elite team chosen to execute Operation Neptune Spear – the mission to kill or capture Osama Bin Laden.

Cairo’s partner and handler Will Chesney joins us to discuss his tribute to Cairo as presented in his book “No Ordinary Dog; My Partner From the SEAL Teams to the Bin Laden Raid.” Fellow SEAL dog handler Jimmy Hatch was part of Will’s inspiration for writing “No Ordinary Dog”.

Despite a recruitment mix-up that nearly put him into submarines, Will was able achieve his dream by qualifying for the Navy SEALs. He even took one step further, becoming one of the youngest members of the US Navy Special Warfare Development Group.

Cairo was a cross breed Belgian Malinois, capable of 40 mph sprints and a bite equivalent to 617 lbs. per square inch. His heightened senses of smell, hearing and sight made him a very valuable member of the team.

On one mission, Cairo attacked two bad guys laying in ambush and was shot twice. As an example of how working dogs are full-fledged members of the teams, Cairo was treated in the field by a combat medic, evacuated by a rescue helicopter and treated by physicians in the base hospital.

When it comes to the famous Bin Laden mission, Will jokes that Cairo was specifically chosen and he just came along as part of the package. Following the mission, President Obama asked to be personally meet Cairo.

Following a grenade blast that caused Will to experience a traumatic brain injury he began a hard struggle toward recovery. He adopted a recently retired Cairo shortly thereafter and believes that Cairo saved his life a second time by helping him work toward healing.

The hero dog Cairo crossed the rainbow bridge on April 2, 2015 at 3:20 PM. Will still carries his ashes with him in a coffee can, even when he travels.

TAKEAWAY: “One time in the SEALs team room someone asked everyone who had their life saved by a dog to raise their hand. Almost everyone did.”