Gary Sinise Foundation CEO Robin Rand joins us to discuss their programs in support of military members, first responders and their families.  He updates us on the Foundation’s Emergency COVID-19 Combat Service program. 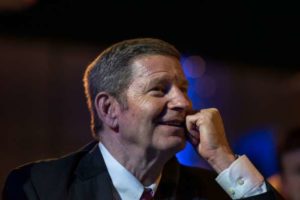 Since March 9, this new element of their programming has funded over 5,000 pieces of PPE and large scale decontamination equipment for 56 first responder units in 25 states. Over $700,000 of the $ 1 million raised for this program has already been allocated and Robin assures listeners that every dime raised for the Emergency COVID-19 Combat Service program will be dedicated specifically to those needs. He shares that there are also addressing individual requests such as front line personnel who have been furloughed and unable to pay their bills.

Robin provides examples of deliverables in each of these categories such as the number of mortgage free smart homes built for severely wounded Veterans and the annual “Snowball Express” program for the families of fallen military heroes.

Robin’s relationship with Gary Sinise began in the winter of 2004 when Robin was Commander of the 8th Fighter Wing at Kunsan Air Base in Korea and Gary and his Lt. Dan Band gave a USO tour performance at the base. Following that performance, Gary sent Robin an email asking where he would be going next and made a point of visiting units under Robin’s command whenever possible.

Prior to becoming the Foundation’s CEO, Robin served 39 years in the Air Force, retiring at the rank of four star General. Following Robin’s retirement, Gary approached him about assuming duties as CEO of the Gary Sinise Foundation.

TAKEAWAY:  “I used to be asked why I joined the Air Force. It’s been so long ago I can’t remember but I know why I stayed in the Air Force – because of the mission. Transitioning to the Gary Sinise Foundation was a natural progression because of their mission.”