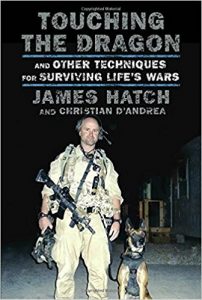 Touching the Dragon is what James Hatch calls the process he had to complete in order to banish his demons. It is also the title of a book he recently published.

James was part of a team dispatched to try and rescue deserter Bowe Bergdahl.   On that mission an AK-47 round tore through his femur and out the back of his leg.  Military working dog REMCO was killed in that same action. Had it not been for REMCO, it is likely that James and his team would have all been slain.

Hatch is an expert military dog trainer and handler. He has a particular affinity for working dogs including “his” dog SPIKE.  That “hair missile” was the foremost on his mind when James created Spikes K9 Fund.  He believes that working dogs has a special ability to foresee danger.

The leg wound ended his 25 year Navy career and began another battle for Jimmy Hatch. In addition to 18 surgeries and twelve months of recovery, he had to now face a new life away from the special teams that had given his life purpose.  This struggle culminated with Jimmy in his back yard with a pistol in his mouth.  In Touching the Dragon Jimmy shares his struggle and learning moments that can help others.

A key to his successful transition through this dark period was the fact that he was surrounded by persons who loved him and were NOT willing to allow him to surrender.  This included his teammate “Fly Fisherman” – the man who saved his life in that battle and stuck by his side throughout the rest of his life.  Jason Redman also visited Jimmy in the hospital and shared a very valuable personal notebook designed to prepare other warriors facing recovery. Congresswoman Gabrielle Giffords also befriended Jimmy and came to visit him in the hospital – a favor Jimmy returned when Gabby herself was shot.

Touching the Dragon is not your usual “action man” book.  It is a superb read and I recommend it to everyone.

TAKEAWAY:  “I believe some suicides happen because time runs out before people realize that they need to insert themselves into that person’s life.  If you are hurting, say something. Ask for help.”