B-17 Over Berlin – Col. Richard Bushong

B-17 Over Berlin – Col. Richard Bushong

B-17 pilot Richard Bushong completed 28 combat missions over Europe during World War II.  He flew as a member of the 390th Bomb Group of the US 8th Air Force, the subject of the compelling documentary “The Cold Blue.” 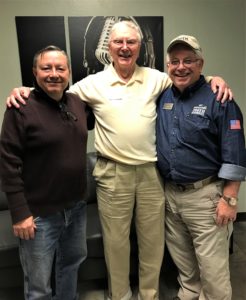 Richard specifically requested to be a B-17 pilot. After completing combat training in Washington, he sailed to England aboard the Queen Mary. Some might consider this luxury travel but Richard says NOT with 18 officers per cabin.

Just before his first mission, Richard fell ill and was grounded. The crew he had trained with flew that mission and was shot down. He also shares the story of his last mission during which he lost two engines while still over enemy territory. With one remaining good engine and a second leaking oil, he made it back to England only to discover that his brakes had failed. “Thank God for good old gooey English mud!” Richard was awarded the Distinguished Flying Cross for bringing his bird and crew safely home from that mission.

Most of his missions were flown in winter and the temperature at altitude was between 30 and 50 degrees below zero. The B-17 was also not pressurized.  While he flew over 43 different air craft during his Air Force career, Richard always admired the B-17 because she was such a steady platform and legendary for survivability. “The B-17 brought me home 28 times.”

Richard’s bomb group was part of the very first daylight bombing mission conducted against Berlin. He says a collective gasp passed through the briefing room that morning when the target was revealed.

Richard continues to serve as a docent at the 390th Memorial Museum, educating future generations about the role he and his comrades played during the war.

TAKEAWAY:  Richard once asked his maintainer to paint all his plane’s patched holes yellow. The mechanic declined stating that then the whole plane would be yellow and not olive drab.