Service dogs and their relationships with the Veterans they help is the subject of a wonderful new documentary directed and produced by award winning filmmaker Josh Aronson. Josh and Tom Flood, one of the Veterans featured in “To Be of Service” join us for a discussion. 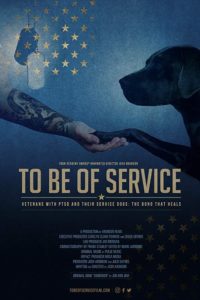 Josh was “pitched” the concept several times before he felt prepared to do the project. However, he says doing the documentary changed him. “I saw the human species in a different way. It’s humbling and it’s troubling but it’s real.”

His objective in making the film is to fire people up. Despite data showing service dogs have a significant positive impact upon Veterans with invisible injuries, the VA has been slow to fund these programs. Thanks to Josh and his film, the “PAWS Act”, which had been languishing in Congress since 2011, now has 250 co-sponsors in the House and will hopefully get passed in the next six months.

Tom describes PTSD as drowning under a layer of ice that you can’t break through. On the other side of the ice you see everyone you love and there is nothing you can do about it. Four years after leaving the Army, he was so medicated that he rarely left his room. Tom was at first skeptical about the idea of a service dog but became hopeful after doing more research. With his new “battle buddy” Mako, he feels he can go anywhere.  He is now down from four pain medications to one and no longer taking 13 of the original 36 other medications he was prescribed.

To Be of Service can be viewed via Netflix, Amazon or I-Tunes.

TAKEAWAY: “To my fellow Vets- my fellow brothers. There IS hope. There’s always hope. If you need a service dog – that battle buddy to follow you into battle after you have come home, there’ s hope and you can do it. Stay strong.”

YOU can help get more service dogs to Veterans! Please contact the following organizations: