The Cold Blue is a stunning new documentary film that gives viewers a glimpse, in vivid detail, of the lives of the 8th Air Force as they flew incredibly dangerous missions during World War II.  The Cold Blue debuts June 6th on HBO. Erik Nelson is the producer and director of The Cold Blue and joins us to share his thoughts. 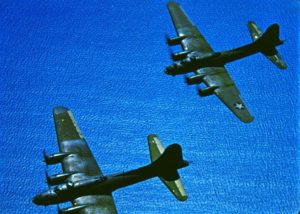 Erik says that “..all too often history has been reduced to clichés or black and white images that immediately distance us from the past.” Erik was searching the national archives for color film from the war and found 34 reels of outtakes from the Oscar winning director William Wyler. (The Memphis Belle)

Because the original film did not have sound, a sound team spent four days flying in a Collins Foundation B-17 to record audio that matched the perspective of each position in the plane. The result is like a visual time machine that gives viewers a first person perspective of those dangerous missions.

The Cold Blue includes interviews with a composite crew of nine actual 8th Air Force B-17 crew members. Two things surprised him; the crew members felt that the most dangerous part of the mission was not over Germany but rather during the takeoff and building of the bomber formations. Secondly, of all the gunners they spoke with, not a single one ever hit a German plane.

Erik’s next project involves 300 hours of Nazi newsreels for a documentary about how the Nazi’s “sold” their beliefs to the German people.

INTERESTING FACTOID: Ben Burtt, sound designer on the original Star Wars was present during screening of the final mix of The Cold Blue at Lucas Film. He told Erik that he and George Lucas watched the original Memphis Belle over and over again when they were doing the story boards for Star Wars.