America Spy; Wry Reflections on My Life in the CIA is a humorous and revealing firsthand look into the life of a CIA agent and his continuing career to protect American interests and citizens. Author HK Roy refers to his 13 years as a CIA Operations Officer as an “adventure”.  He is being modest. From narrowly escaping capture by Iranian terrorists in Bosnia to using his wife as part of the team while planting a listening device in Latin America, spy life was certainly not boring. 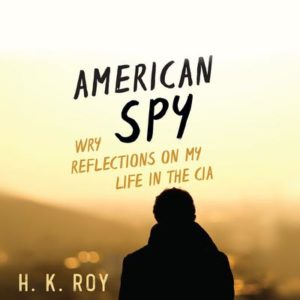 But it often also wandered into the absurd. HK shares several examples of government bureaucracy run amok including refusal to reimburse for gas purchased on the black market because he did not receive a receipt. Before he was able to receive his full retirement pay, the agency insisted he reimburse $150 because some foreign currency he was issued in the field devalued before he was able to return the funds upon his return to Washington.

American Spy is an engaging and enlightening read, made even more so by the author’s wry gallows humor. As an example, when first being evaluated for a position with the CIA, he worried because he had sent wedding invitations to some unusual additional guests including the Queen of England and John Hinckley, Jr.  (The Queen did not RSVP but Hinckley did).

Roy reveals his frustration at how often good intelligence was ignored or subverted by political aims. This was one of his primary motivations in writing the book; intelligence agencies cannot and do not defend themselves against unwarranted public attacks. He also feels that there is no reason the American public should not be aware of things that our enemies already know.

However, American Spy is not an expose. Roy is very cautious to protect secrets and people.

Roy is a strident supporter of an event called “Spookstock”, an annual fundraiser for families of CIA Operatives and Special Forces killed abroad. While the event is closed to the public, listeners may donate here and here.

TAKEAWAY: “Devotion to duty by apolitical intelligence, military and law enforcement professionals is key to the survival of our republic.”