Sgt. Will Gardner was a labor of love for Max Martini. An accomplished actor, he has played military roles in many films including “13 Hours”, “The Great Raid”, “Captain Phillips” and the TV Series “The Unit”. 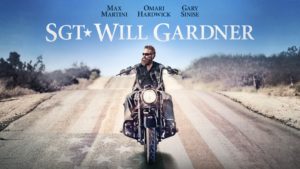 While Max has relatives who served in the military and law enforcement, it wasn’t until his role in “Saving Private Ryan” that he was inspired to create a calling for himself to help Veterans. He feels that “Saving Private Ryan” was key to allowing Veterans of that generation to open up & heal emotional injuries. His hope is that Sgt Will Gardner will help the Veterans of current wars do the same by helping to alleviate the notion that there is a stigma attached to asking for help.

The story line of Sgt. Will Gardner was inspired by Max’s interaction with one particular Army Ranger he met during a trip to Iraq.  They struck up a correspondence and Max soon learned about the challenges this particular Veteran was having integrating back into civilian life. His wife had left him and his brother (also a Veteran) took his own life. He lost his job and for a while was living out of his car.

Making Will Gardner was not easy; particularly given the fact that Max wanted to give 30 percent of the proceeds back to charities that assist Veterans.  Despite getting “laughed out of” several pitch meetings, the film was finally made at a cost of $2.5 million. A tremendous feat considering the cast includes A-List actors like Gary Sinise, Elisabeth Rohm, Dermot Mulroney & Robert Patrick.

TAKEAWAY: “We spend a huge amount of money to train a soldier for combat. Why are we not putting an equal amount of money, time and effort into leaving the military so that they can reintegrate properly and live full and productive lives?’