“Bone Rattle” author Marc Cameron is quite familiar with some of the scenarios presented in his latest thriller. He lived them during his long career with the US Marshal 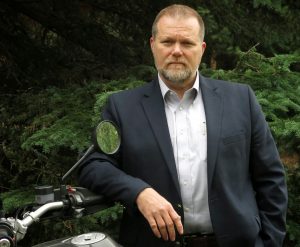 Much of Marc’s career was in judicial protection but he most enjoyed his time in fugitive apprehension units. He draws his story ideas both from his experiences and travels as well as current world events like the John Clark (Tom Clancy series) character’s exposure to the world of child trafficking. Marc is a trained tracker and we spend some time discussing how technology like social media has augmented the toolkit of man hunters.

Marc was always interested writing, telling his wife he wanted to be a novelist even before they were married and then confessing he also wanted to be a police officer. She bought him a ballistic vest and a typewriter. His first published short story paid a month’s rent and his wife said “Now go write us a couch!”

He begins much of writing with basic pen and paper. While working on three different series simultaneously may seem challenging, he says they are all so different it has not been a problem.

We spend a little time “talking shop” and the importance of situational awareness in today’s dangerous world. Marc believes one of the biggest threats is people becoming so attached to their cell phones that they walk around unaware. He also shares his take on the status of the current relationships between law enforcement and the civilian community.

TAKEAWAY: Marc says he is fortunate to have developed a very successful career as a novelist but it is still “the SECOND best job in the world”. He very much misses his time in the Marshals service.