Bone Frog Cellars and Bone Frog Coffee Founder and CEO Tim Cruickshank says “giving is the reason we exist as a company.”  I bet you won’t find that mission statement on many company websites. 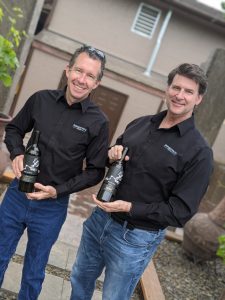 Tim served with SEAL teams on both coasts. In addition to being the team corpsman he was also the primarily responsible for demolitions. “My kids knew nothing but me being at war the entire time. I was gone for half my son’s life at one time.”

Tim retired in 2016 and was inspired to start the Bone Frog Companies while speaking at his retirement ceremony. “We had been at war sixteen years and it was still continuing. I wanted to find a way to give back. They say we die twice; once when we stop breathing and once again when someone says our name for the last time. I wanted to create a way to keep reminding people about these heroes.”

Tim knew nothing about roasting coffee or making wine. So he engaged subject matter experts including Dave Stewart, one of the Founders of Seattle’s Best Coffee. His partner Dave Johnson also plays a critical role in keeping him aware of his left and right boundaries.

A portion of the proceeds from both Bone Frog businesses are donated to military charities including the Navy SEAL Foundation. This Foundation helped Tim his family while he was deployed

The Bone Frog symbol was first drawn by a Navy SEAL Keith Kimura and became a sacred symbol upon his death. SEALS use the symbol to commemorate a fallen teammate.  Tim redrew the symbol out of respect for Keith and integrated the SEAL Trident and Navy anchor into his company’s logo.

TAKEAWAY: “For everyone who is thinking of starting a new business; find something with purpose that you are passionate about. For Veterans – there is a huge community out here ready to help you.”