CIA Case Officer Barry Broman recruited 41 agents during his 26 year career with the agency. He recounts some of the most interesting moments in his book “Risk Taker, Spy Maker” 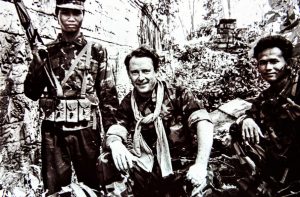 He first fell in love with East Asia when his Air Force officer father invited him along on an assignment with the Thai Air Force.  A caveat was that Barry would find a job so he secured a position with the Associated Press, becoming the youngest AP photographer in the world.  His first assignment to Vietnam would be the first time he was shot at but wouldn’t be the last.

After receiving his college degree on a Navy ROTC scholarship he would spend seven months in Vietnam with the 2nd Battalion, 5th Marines.  Before he deployed to Vietnam, one of his professors asked if Barry had ever considered joining the CIA. Barry planned to go back to the AP after the military but chose to talk to the recruiter just for fun.  When he notified the recruiter that he was deploying to Vietnam the recruiter gave him a business card and said “If you live, give me a call six months before you leave the Corps.”  Barry did and 2 weeks later he joined the agency.

Barry emphasizes that he wasn’t a spy, he recruited spies.  “We were in the business of making dreams come true.” He shares insights into the life of a case officer. The job is usually not a family affair, but he never approached a target until his wife approved.

He shares some interesting stories including the recruit who would only take assignments that were extremely dangerous and worked on a form of commission. A watershed moment of his career involved working with MI-6 on recruiting a hard target.

TAKEAWAY: “Only about ten percent of case officers make successful recruitments. It’s not baseball. You don’t want to have a 41-5 record, you want a 41-0 record. Approaching a recruit and failing has consequences.”