This year it was an honor to be asked by Nevada & Arizona Hall of Fame broadcaster Bill Buckmaster to put together a Memorial Day show for his program. 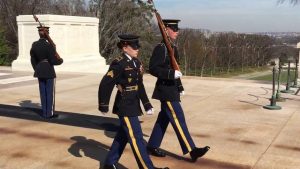 The Tomb of the Unknown Soldier has been guarded every minute of every day since 1937. Ruth Robinson is one of only five female soldiers to be selected for this duty.  Only 20% of the soldiers that volunteer are selected for training and even fewer ultimately selected. Ruth also serves as the Education Committee Chairwoman for the Society of the Honor Guard, Tomb of the Unknown Soldier.

Ruth was awarded badge number 643. The Sentinel Badge is the third least awarded Army Badge and the only one that can be revoked.  Ruth shares some of the traditions and ceremony involved with being a Sentinel.  Examples include the fact that Sentinels do not wear rank while “walking the mat” so as to never outrank the unknown soldiers.

Ken Rodgers is a Vietnam Combat Veteran who was involved in the Siege of Khe Sahn. That epic battle pitted 6,000 Marines and Vietnamese allies against 20,000 or more communist North Vietnamese troops.  274 of his comrades did not survive. Ken and his wife produced a very powerful documentary about that battle called “Bravo! Common Men, Uncommon Valor.” They have also produced a new documentary called “I Married the War.” 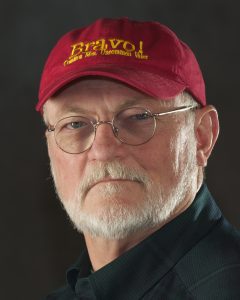 There is a great diversity of opinions among Veterans about how to observe Memorial Day. Ken shares his perspective including the fact that he chooses to not attend funerals because he would rather remember his comrades as they were in life.

TAKEWAY:  There are  525,600 minutes in a year. The least each of us can do is sacrifice a minute for those who sacrificed their lives.