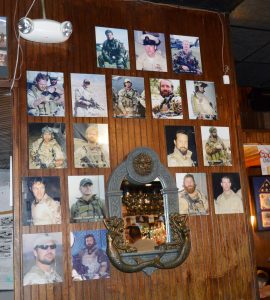 Nelson Miller KNOWS the reasons for Memorial Day. He spent two decades in the military, much of it as a Navy SEAL. He has lost comrades in combat. One wall in his Trident Grill restaurant is dedicated to those comrades lost.

When it comes to Memorial Day, Nelson leans toward George Patton’s position of “It is foolish and wrong to mourn the men who died. Rather we should thank God such men lived!”

“When I have a bad day or a bad week or a bad moment, and I think of some of my friends and realize; what would they give to have my bad day? That puts things in perspective.  I want to remember these guys a week from Tuesday, not just on Memorial Day.”

BBG and Nelson agreed that everyone should observe Memorial Day in their own way – somber or celebrative. Just so long as they recognize the reason the day exists. 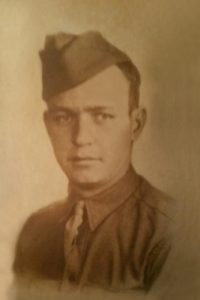 We also share a heartwarming Memorial Day story brought to our attention by the folks at Legacy Tree. James William DeGraff was an Army Private killed on Utah Beach on D-Day. His full story might not have been told were it not for Don Alfonso. Don was visiting a cemetery in Normandy when his eye was drawn to a headstone of the fellow Floridian.  Unable to let go of the connection he made with this soldier, Don commissioned Legacy Tree genealogists to do extensive research so that James’ story will not be forgotten. They were even able to locate a photo of James taken just before deployment.  This story showcases the strong connection between the American public and those who fight for our freedoms, even when there is not a familial association.

Takeaway:  When asked what civilians can do to honor those who paid the ultimate price, Nelson delivered a short concise answer – “Live..because we are not here very long”.