DELTA Force is one of the world’s premier Tier One military units – and Mike Vining was an original member. 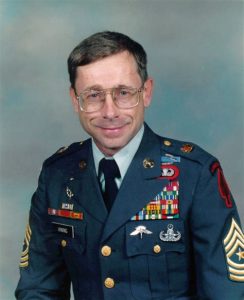 As a teen, Mike was always fascinated with science. He responded to an advertisement in the back of Popular Science Magazine and sent a dollar for “101 Explosives & Pyrotechnic Formulas”.  The career of an explosive ordnance disposal technician was born.

Mike volunteered for service in Vietnam and participated in the demolition of largest cache of enemy ammunition & explosives during that war. Discovered in Cambodia, the massive stockpile of weapons was nicknamed “Rock Island East”. The 79 ton cache required 300 cases of C4 explosives and 12 cases of detonation cord.  Of course the enemy wanted those munitions back and Mike describes that rather “sporty” mission.

When he learned the Army was forming a new unit that needed EOD Technicians with combat experience he threw his name in the hat. Of the 130 candidates in the first selection course only Mike and 8 others passed. He would become one of the first members of DELTA Force. DELTA was declared fully mission capable in the fall of 1979. Their first mission was Operation Eagle Claw, the ill-fated mission to rescue the U.S. hostages being held in Tehran.  Mike describes that mission in great detail and how he barely made it out alive. Following the mission Joint Special Operations Command and the 160th Special Operations Aviation Regiment. (“Nightstalkers”) were established.

He was also involved in Operation Urgent Fury (the invasion of Grenada). While some of their missions failed to achieve their objective, some good did come out of failure. Among these are the creation of US Special Operations Command.

Mike shares some other missions, including one in Atlanta that required the President to waive the Posse Comitatus Act.

He currently serves as the historian for the Vietnam Veterans Chapter of the National EOD Association (NATEODA) and the assistant historian for NATEODA. Mike also conducts historical EOD research for the EOD Warrior Foundation. He is also a member of the Board seeking to create an EOD Heritage Museum at Eglin AFB, Florida.

TAKEAWAY: Colonel Charles Beckwith (Founder of DELTA Force) was difficult to work with but was the perfect man for the job.