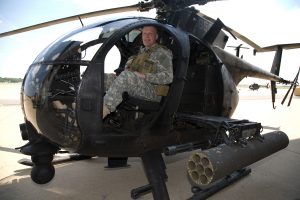 When you are a pilot for the Army’s elite 160th SOAR Night Stalkers, there is no such thing as a “normal day”.  But November 27, 2006 was a day David Cooper won’t forget.

Cooper was flying an AH-6 “Little Bird” as lead in a six helicopter formation delivering Special Operations Forces on a mission north of Baghdad.  The Night Stalkers earned their nickname as the first unit to fly using night vision equipment. That day they were flying in broad daylight across a featureless Iraq desert.  David says that because of the clandestine nature of their missions, it is rare to hear ANY radio traffic, so it came as an extra shock when he heard words that, up until that moment, he had only heard in World War II films; “Mayday, Mayday, Mayday..”

A lucky RPG round blew off his wingman’s tail rotor, forcing him to make a running landing at 60 miles per hour.  The crew members were injured but alive.  The Special Forces and Cooper landed to secure the crash site while the remaining helicopters returned the injured pilots to base.  Before a recovery team could arrive, an enemy force that included trucks with heavy anti-aircraft guns arrived and began firing at the US Forces. In the wide open desert, the team had no cover. Cooper and his co-pilot took off to engage the enemy and draw fire away from the ground troops.  He was flying at 140 mph at altitudes of less than 75 feet, pouring fire into both the enemy vehicles and terrorists firing from a nearby building.  Things were so intense that his co-pilot took to firing his rifle out the helicopter door.

Coop says “Soon, we were out of ammunition but not out of bad guys.” He landed three times under fire to reload his armaments & fuel from the crashed helicopter, each time returning to the fight. His actions that day earned him the Distinguished Service Cross, an award second only to the Medal of Honor.  Add that to a resume that includes a Silver Star, a Distinguished Flying Cross, three Bronze Stars and fourteen Air Medals (7 with Valor Device) and one can see why David Cooper was elected to the Army Aviation Hall of Fame in 2010.

One of the F-16 pilots providing close air support in this battle was Major Troy Gilbert, who gave his life protecting the ground forces. The pilots injured in the original crash walked right past the doctors, jumped into another AH-6 and returned to the scene with the Quick Reaction Force.

TAKEAWAY: Cooper accepted the Distinguished Service Cross with words one might expect from a true quiet professional; “I accept it on behalf of all Night Stalkers, past, present, and future.”