“The League of Wives; The Untold Story of the Women Who Took on the U.S. Government to Bring Their Husbands Home” is Heath Hardage Lee’s homage to this very inspirational group of women.  Heath has worked in the women’s history space for twenty years and was horrified that this narrative had never been told. 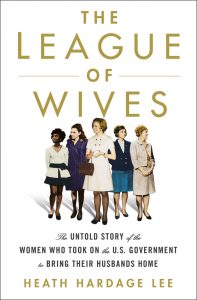 In addition to the tragedy of having their husbands as prisoners of war or missing in action, perhaps the most heartbreaking aspect of this story is how family members were treated by our government and military institutions. Navy Commander Bob Boroughs was an exception, risking his own career to “color outside of the lines” and even recruiting some of the wives in a surreptitious campaign to place coded messages in their correspondence with their husbands.

The societal context of the era is an important underlying theme, taking place during a time of intense change in our country. Most of these military wives considered themselves “by the book” but the reticence of our government to provide them any information or support eventually caused them to lose patience and take matters into their own hands.

Sybil Stockdale, wife of Admiral James Stockdale, the highest ranking officer held prisoner in the infamous Hanoi Hilton, played a foremost leadership role in the effort. Her husband was eventually awarded the Medal of Honor and Sybil was awarded the Navy Ombudsman Award.

President Richard Nixon, himself a Navy Veteran, ushered in a significant departure from the Johnson administration policy of “just stay quiet”. He or his staff personally answered every single telegram from POW’s wives and publicly thanked the League of Wives upon the conclusion of the war.

Heath also shares the “uneasy” relationship the wives developed with radical peace activists due to the fact that they were the only organizations in control of communication in and out of the POW camps.

The League of Wives has been optioned by Reese Witherspoon’s production company and Sony pictures so we may soon see it on the big screen.

TAKEAWAY: “As an individual you may not be heard. But when these wives banded together they became empowered and an unstoppable force.”