Submarine Veteran Kevin Loewe admits his initial motivation for joining the Navy did not spring from patriotism or high ideals; he just needed a job. But he came to love submarine service, spending most of his 20 active duty career in the “silent service”. Kevin served on several submarines including fast attack boats and ballistic missile submarines. 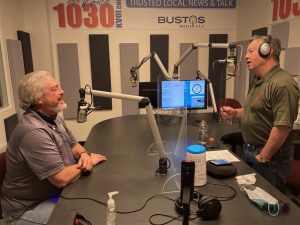 On his very first deployment, the relief sub was delayed and they ended up spending 91 days submerged. “The only thing we had left on that sub was sardines, crackers and peanut butter.” There were some exciting times too – much of his time on the USS Queenfish involved secret missions.

One mission put Kevin into one of the most exclusive clubs in history. On a visit to the North Pole, a scientist reminded Kevin that in recorded human history, fewer than 5,000 persons had stood where he was at that moment.

We also discuss the term “shipmate” and why it is so important. Part of qualifying for the submarine warfare pin in convincing your fellow crew members they can trust you with their life. Crew cross training is critical so that anyone can “at least keep a band aid on a problem” until the experts arrived. EVERY submarine sailor is trained in firefighting as that is one of their greatest threats.  One of his boats even had a fire in the engine compartment when their were moored to the pier.

Reflecting back on his career he only has one regret. When offered his choice of next duty stations he chose the USS Queenfish over the USS Darter, the last diesel submarine in commission. He later learned that because the Darter was so old they were no longer allowed to submerge and spent most of their time just traveling from port to port. (And bar to bar!)