Unforgotten in the Gulf of Tonkin – Eileen Bjorkman

Unforgotten in the Gulf of Tonkin – Eileen Bjorkman

“Unforgotten in the Gulf of Tonkin; A Story of the US Military’s Commitment to Leave No One Behind” is a superbly researched book.  “We will leave no person behind” is an ethos of our military dating as far back as before the Revolutionary War. Author Eileen Bjorkman served 30 years in the Air Force, much of it as a flight test engineer. She has experience with more than 25 different military aircraft. 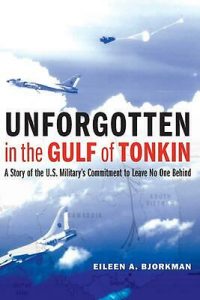 Flight Test Engineers are behind the scenes personnel who work in the backseat of aircraft and control rooms to design tests in order to gather data.  They then make recommendations for improvements and changes. “That’s why we test. So our warfighters can be their best.”

While Unforgotten in the Gulf of Tonkin revolves around the specific story of Navy pilot Willie Sharpe who was shot down over Vietnam in 1965, it is best described as a broader examination of the evolution of Combat Search and Rescue.  Eileen chose to feature Sharpe because his case featured many historic firsts. These included forward staged rescue helicopters and orbiting amphibious aircraft that were literally put into place a few days before he was shot down.  Radio traffic of the entire rescue was tape recorded and a copy was presented to Sharpe.

In the book Eileen shares some amazing stories of combat rescues ranging from World War I to the first use of a helicopter way back in World War II. The story of one particular Catalina amphibious aircraft rescue of the crews of three different bombers while under fire is especially compelling.

We also spend some time talking about specific technologies (like the ejection seat) that improved survivability. The Department of Defense is even soliciting design proposals for Autonomous Personnel Recovery vehicles that would allow downed pilots to “phone for an taxi”.