The Medal of Honor was presented to Staff Sergeant David Bellavia for his actions November 10, 2004 during the second battle of Fallujah. He would become the first living Iraq War Veteran to earn our nation’s highest military decoration. He also sits on the board of the National Medal of Honor Museum Foundation. 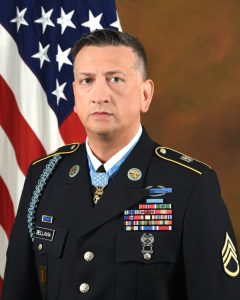 While clearing a block of houses in Fallujah, David and his soldiers walked into a fortified ambush. He describes it as a “house ready to blow up”. David’s cover fire allowed his comrades to break contact but the insurgents remained. In his words, David said that at that time in Fallujah, waiting for an airstrike was like”taking a number at the local DMV.” He also knew that if these fanatical enemies were allowed to escape, a folded flag might be presented to an American family sometime in the future.

He says the suicidal, fanatical enemies they faced in Fallujah were much like the Imperial Japanese faced by WWII recipient Hershel “Woody” Williams.

However, David also recognized that if too many men were sent back into that building, they might lose even more men to rescue them. Embedded reporter Michael Ware personally witnessed that action and said that after pacing like a caged tiger, David decided to re-enter the home by himself.  He single handedly cleared the dark house by killing four enemy and badly wounding a fifth.

Every Medal tells a story and the mission of the National Medal of Honor Museum is to establish a place where these legacies can be honored and to educate future generations. Museum President and CEO Joe Daniels led the initiative to fund and build the National 9/11 Memorial & Museum prior to joining the Medal of Honor Museum.  He says there are many parallels between the “warrior DNA” of Medal of Honor recipients and the brave first responders who went back into the towers on that fateful day.

The museum will be located in Arlington, Texas and the Foundation is also seeking to build a Medal of Honor monument in Washington, D.C.

TAKEAWAY: “That Medal of Honor represents every drop of blood shed to keep this country free.”