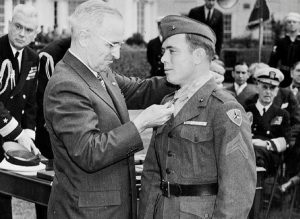 President Truman presents Woody with the Medal of Honor

Medal of Honor recipient Hershel “Woody” Williams had no interest in joining the military but like many patriotic Americans decided to volunteer following the attack on Pearl Harbor.  Woody would have to wait until he was old enough join and his first attempt at the Marine Corps was rejected because he was too small.

He was trained in the use of demolitions and operating a flamethrower after being shipped to the Pacific theater. Woody says that their briefing on board the ship prior to landing on Iwo Jima told them to expect to only be on the island for 2-3 days.  What was NOT anticipated was 22,000 Japanese willing to fight to the death and 800 heavily fortified and camouflaged pillboxes.

Two days after his company landed, Woody was the only member of his 6 man flamethrower/demolitions team not killed or wounded. So when his commander asked him if he could help them break through, Woody knew it was his job.  He didn’t question the order.  Assigned four Marine riflemen as protection, over the course of several hours he took out 7 bunkers after returning 6 times for refueled flamethrowers.  Two riflemen died while protecting him.  For his actions on February 23, 1945 Woody was awarded the Medal of Honor.

Woody said he was more frightened meeting with the Marine Corps Commandant than he was when meeting President Truman.  The Commandant delivered a message he will never forget; “That medal does not belong to you. It belongs to all those Marines who never got to come home. Don’t you ever do anything that would tarnish that medal.”  To this day Woody keeps his Medal of Honor brightly shined and when he DOES wear it, he does so to honor those two Marines killed protecting him and the others who never came home.

Woody continues to honor those who fell and their Gold Star families and seeks to educate future generations about the importance of freedom through his Hershel Woody Williams Medal of Honor Foundation.

TAKEAWAY: “Somehow we have got to restore history and civic classes for our young people. Unless we do we will never get people to think of America again the way they did in the past.”