Marion “Tony” Marshall had a penchant for pushing boundaries.  This led to some rather intriguing experiences during his time as a POW in Vietnam. 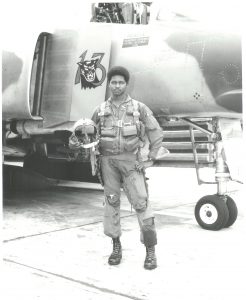 Tony always wanted to be a pilot. Despite “skating” in high school he secured an interview for a military academy appointment and was one of only 6 black cadets in his Air Force Academy class of 1,000 persons.  His eyesight prevented him from entering pilot training so he chose to become a navigator just to get in the cockpit.

Tony Marshall LOVED the F-4 Phantom and it showed in his performance. He was awarded no fewer than FIVE Distinguished Flying Cross medals during a nine month period.

Despite commenting that most of his fellow POW’s were there because they “..did something stupid”, in Tony’s case it was a mechanical failure that caused his plane to go down. His pilot punched them out at 3500 feet and the next thing Tony remembered was being on the ground about to be captured.

Tony saw his 270 days as a POW as SERE (Survival, Evasion, Resistance, Escape) “Graduate School” and decided to see what he could get away with. He leveraged his knowledge that his captor’s principal motivation was to save face. As an example, when offered the opportunity to write a letter home, he negotiated his version through five re-writes and was still able to include various secret messages.

When invited to the White House to meet President Nixon, he had his own “Forest Gump” moment when he refused to immediately release the President’s handshake. This resulted in the President inviting him to a party later that evening.

Vietnam POW’s were offered their choice of next assignments. This allowed Tony to finally achieve his dream of becoming a pilot, retiring as a Lt. Colonel and going on to fly commercial jets.