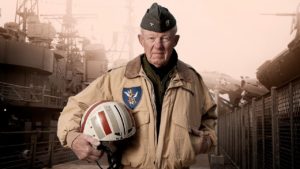 Navy Pilot Charlie Plumb had complete 74 combat missions over Vietnam and was five days away from completing his tour of duty when a surface to air missile brought down his F-4 Phantom near Hanoi.

He would endure 2,103 days as a POW and recounts these experiences – and lessons learned – in his book “I’m No Hero”.  The book is now in its 33rd publication and is filled with stories of resilience, inventiveness and the power of the human spirit.

Charlie shares inspiring and compelling stories of the many things he and his fellow POW’s did to survive, outwit their Vietnamese captors and keep hope alive.  One of the first things that POW senior leadership did was redefine the Code of Conduct. “Return With Honor” became the new code.

The power of the human mind when coupled with desperation and a strong spirit is almost limitless. They developed various means of communication often used right under the noses of their guards. While working in the camp garden, POW’s would hoe the ground in specific rhythmic sequences, communicating via “tap code”.  The prisoners even painstakingly taught each other college level courses using their secret codes. Perhaps the most amazing example was the fact that Charlie almost completely constructed a radio using scraps and other materials from around the camp.

His story of a random encounter with a sailor from his air craft carrier has become a lesson used by speakers around the country; “Who Packed YOUR Parachute”.

Contrary to initial warnings to their families that Charlie and his comrades would return home “broken men”, many of the POW’s have excelled in life.

TAKEAWAY:  Adversity is a horrible thing to waste.  A person can do amazing things when they make the decision to be inspired by adversity rather than be bound by it.”