Operation Desert Storm would be Jeff “Tico” Tice’s first opportunity to fly combat missions.  Things didn’t turn out as well as planned. On his second combat mission of the conflict, a last minute mechanical issue forced Jeff to switch aircraft and didn’t allow time for his good luck tradition of spitting into the plane’s exhaust.

On the second day of the Desert Storm “Shock & Awe” campaign Jeff’s F-16 was hit by an Iraqi surface to air missile.  He would become one of 23 prisoners of war from that conflict, enduring 45 days in captivity. 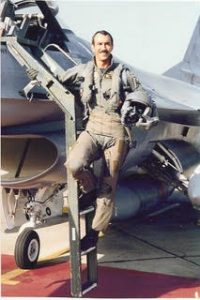 Between 9 and 12 missiles were fired at Jeff and his wingman as they egressed the target area and Jeff dodged 4-5 before he had a “32 foot day” (the blast radius of the missile is 33 feet).  He was able to fly his aircraft another two minutes before it became clear he would have to eject. Jeff intricately described the temporal distortion that takes over in these situations.

The Bedouin tribesmen who captured him had “..no shoes and no teeth but brand new AK-47’s so I knew they weren’t on our side.” During his 45 days as a POW, Jeff lost 45 pounds and endured several methods of torture. When asked to do a videotape message “for his family”, Jeff said “The only real thing under recent examination is..I Love You.” While on its’ face the phrase made no sense, the first letter of each word spelled out TORTURE.

He had another narrow escape when four 2,000 lb. bombs were dropped on the Ba’ath party headquarters, the same building in which Jeff and his fellow POWs were unknowingly being held.  None were seriously injured. To this day Jeff still has a “Lucky Devils” license plate on his car.

TAKEAWAY: Jeff’s call sign “Tico” does not have an exotic origin story. He gained it because his last name was spelled incorrectly on his first aircraft.