ATF Special Agent Cynthia Beebee never considered a career in law enforcement.  After all, the good guys on television were always men and in the 1960’s there were few opportunities for women in the field. But two things happened in 1972 that would change her life; President Nixon signed Title IX into law and the ATF became an agency independent of the IRS. Her story is told in the book “Boots in the Ashes”. 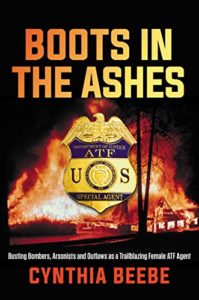 Cynthia excelled over her 27 years as an ATF agent. She was the first woman to earn “Top Gun” honors at the ATF academy where she was a classmate of Jay Dobyns. Ironically, her very first case assignment happened before she was even allowed to carry a weapon. It was also the case that inspired her to become an arson/bombing investigation specialist.

We discuss some of the more intriguing characters she investigated as an ATF agent including bomber Lauren Bellrichard and biker gang enforcer Ron Petkus. Like the case of Al Capone finally brought to justice with tax evasion charges, some of Cynthia’s cases were prosecuted using tools tangential to the original crime. Charges like felony possession (Petkus) or mailing threatening letters (Bellrichard) are an effective way to get the bad guys behind bars quickly on federal charges.

Cynthia also shares the story of Richard Kagan, a very successful criminal defense attorney who hired someone to kill his wife with a car bomb because he wanted to marry a younger girlfriend. Cynthia said she had never worked a case in which everyone, including the bad guys, wanted to catch Kagan.

One of her favorite assignments was augmenting Secret Service protection duties. Vice President Bush, Ronald Reagan, Al Gore and the Clintons were among some of her protectees. The best advice she received for these situations was “..always try to get assigned to the kitchen..that way you will never go hungry.”