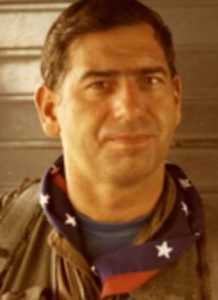 Ed “Moose” Skowron accumulated more than 15,000 hours in the cockpits of both civilian and military aircraft. Some were combat missions over Laos that were not credited. However, it was his 99th combat mission in Vietnam that he remembers most.

Ed wanted to be a pilot since he was a child. He wanted to fly for the Air Force or Navy but admits he didn’t like school all that much, which limited his options.

The Air Force had a navigator training program that didn’t require a college degree so he signed up.  After beginning training his class was informed that the Air Force was short pilots and any navigator interested could test for pilot school. Ed jumped at the chance.

Some of his first training would be a Luke Air Force base outside of Phoenix, which would prove ironic later in life. As a 21 year old flying with nuclear weapons under his wings, he remarks why war is a young man’s vocation.

Ed jokingly confirms that during the early days of the Vietnam War “We were not in Cambodia and we were DEFINITELY not flying over Laos.” He relates one mission while “not flying over Laos”. A covert ground operator radioed he was popping white smoke to pinpoint his location. When Ed saw white smoke rising through the tree canopy he radioed back to confirm. The reply he received was “I did NOT pop smoke – put all your bombs on that location.” It turned out the enemy had been monitoring their radio frequency and ending up paying for that deception with their lives.

In Vietnam, 100 combat missions were required before being sent home. Ed’s last mission in September of 1966 was supposed to be a “milk run”. But diving to check out a burned out truck he soon found himself staring down the barrels of numerous anti-aircraft guns. He was hit and headed out to sea.  Smoke got so bad in cockpit that Ed couldn’t see his own hands.

He tried to eject but soon realized he had neglected to remove the seat pins during pre-flight checks. Luckily he was able to remove the pin and ejected.

The rescue crew that landed in the ocean to rescue him was reserve unit out of Luke AFB – they were on their very first mission and Ed was on his last.  When rescue crew landed, mortars and other rounds churned the water all around them. Ed recalls the pilots’ eyes were wide as saucers.  Despite a few wounds he was recovered and went on to a long aviation career.

TAKEAWAY: “You DID NOT want to get shot down over Laos. At least in North Vietnam there was a chance you would be taken prisoner.”