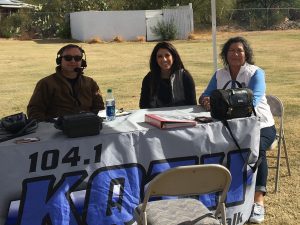 Wreaths Across America will be placing wreaths on the graves of fallen warriors at over 1,200 cemeteries across the nation, abroad and even at sea.  Their mission is to remember our fallen US Veterans, honor those who serve and teach children about the value of freedom. American Warrior broadcasts live from one of these locations; East Lawn Palms Cemetery thanks to the generous underwriting support of the Hospice- Veterans Partnership of Southern Arizona.

Wreaths Across America was the brainchild of Morrill Worcester.  As a 12 year old paper boy, he won a trip to Washington and his visit to Arlington National Cemetery left a lasting impression.  In 1992 Worcester Wreath found themselves with an excess of inventory for the holiday season so Morrill arranged to have the wreaths placed on graves in an older part of Arlington that was receiving fewer visitors.  His tribute went on without much fanfare until a photo of the adorned graves hit the internet and calls came in from across the country. 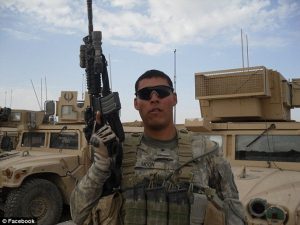 Marsha Moon is the organizer of the East Lawn Wreaths Across America event. Her son Chris Moon was a first round draft pick of the Atlanta Braves and received a scholarship to play for the nation’s #1 ranked college program.  But Chris Moon was a warrior – and a patriot.  According to friends, Chris believed that real warriors competed on the battlefield so he chose to forego a professional baseball career to defend our nation.  He became an Army sniper. On July 13, 2010 Chris succumbed to wounds suffered while serving in Afghanistan.  He is buried in the Veteran section of East Lawn alongside 16,000 of his comrades in arms.

As a member of the American Gold Star Mothers, holidays were particularly painful for Marsha and her family. Laying a wreath upon her son’s grave assures that his name will never be forgotten. Volunteers who participate in laying a wreath are encouraged to speak the Veteran’s name out loud and thank them for their service.  Listeners can support this amazing program by making a donation toward the 2018 event or volunteering to help lay wreaths at their local cemetery.

Meredith Ford is Communications Manager for Case de la Luz Hospice. The Hospice-Veterans Partnership of Southern Arizona is a part of the We Honor Veterans program that seeks to assure that Veterans receive the support and dignity that they deserve at the end of life.  Meredith shares how hospice care supports families and caregivers. The majority of patients remain in the home surrounded by their family with training and support from their hospice provider. The partnership also gathers the stories of their Veteran clients and submits them to Library of Congress.

TAKEAWAY: “It’s never too late to give our American Veterans a heroes’ welcome home.”