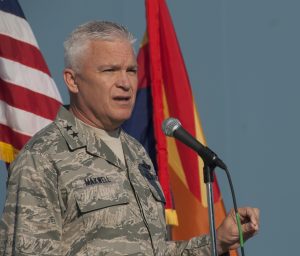 Our Veterans Day show features guests from the one of the highest ranks to the lowest; Major General Edward Maxwell (US Air Force) and Private First Class Jessica Lynch (US Army).

Maj. General Maxwell is the Component Commander for the Arizona Air National Guard. He is an Air Force Academy graduate and also holds an MBA from the University of Arizona.  Ted is a command pilot with more than 4,500 flight hours – some in the skies over Iraq.

Jessica Lynch came into the public eye when her Army convoy was ambushed March 23, 2003 in Iraq. She was wounded and captured by enemy forces.

Despite serving for different lengths of time at different ranks, both Jessica and Ted’s observations when discussing Veterans Day share several common themes; their admiration for Veterans of the previous generation and the importance of supporting and taking care of Veterans who have returned from war.

Ted and I discuss my perception of the growing gap of understanding between our civilian and military populations. We also touch on the emergence of a “warrior caste” in America – families with multi-generational traditions of service.

Ted and I also discuss one of my biggest gripes; people who wish Veterans a “Happy Memorial Day”.

In the 15 years since her combat experiences, Jessica has become a teacher and has been very involved in programs that support Veterans and their families.  Reflecting upon Veterans Day she says that it should all be about the love, care and support our communities can provide for those who served.

Both Ted and Jessica feel very confident about the young people that are now stepping up to “fill their boots”.

TAKEAWAY: “The best thing that people can do to honor the service of Veterans is to learn more about what we do and the challenges our families may face.”