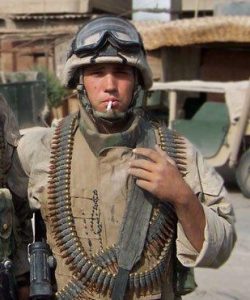 The 2nd Battle of Fallujah was the bloodiest of the Iraq War.  So then why don’t more people know about it?

Donald Baker is a Marine Veteran with 9 years of service including three deployments to Iraq and one to Afghanistan.  His path to becoming a Marine was set forth by two elements; his father’s service as a Force Recon Marine in Vietnam and Donald’s dream of becoming a filmmaker.

One of his early films about World War I won an award and motivated him to make other movies about war.  But Donald believed he could not properly tell stories about war if he had never been in the military or seen war.  Inadvertently he would find himself at the tip of the spear in a battle that would become part of Marine Corps lore; the most brutal house to house combat since Hue City in Vietnam.

Before returning home, his Gunnery Sergeant said something that would come full circle; “The world doesn’t care, they have already forgotten you. They’ve already moved on.”  Donald has found that when he mentions the 2nd Battle of Fallujah he often gets blank stares. This reinforces his belief in the need to tell the story of his fellow Marines at Fallujah. His article “This is Why Fallujah is One of the Marine Corps Most Legendary Battles” was recently published by We Are the Mighty   .

Much like the Marine battles of World War II, the 2nd Battle of Fallujah was fought up close and personal with rifles, hand grenades and Bangalore torpedoes. Donald shared that sometimes the enemy was within inches of his muzzle. Donald related one particular mortar attack that wiped out all but two of his seven man machine gun squad.  He also shares his respect and admiration Patrick O’Donnell, a civilian author and historian who stood shoulder to shoulder with his platoon during the battle.

So long as they speak your name, you shall never die. Here are the names of comrades from Donald’s Company who made the ultimate sacrifice at Fallujah:

TAKEAWAY:  “I think every Veteran has to deal with thoughts about their brothers who didn’t get to come home. It weighs upon your heart. They don’t get to tell their story so it is up to those of us who are left to be able to do that for them. “