The Korean War – Three Veterans who were there

The Korean War – Three Veterans who were there 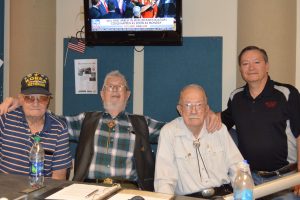 Three Korean War Veterans join us in studio. Despite US losses of 36,574 killed and 103,284 wounded, Korea is known as “The Forgotten War”.  An astounding 7,747 Americans remain unaccounted for.

Wally Howard’s first enlistment was with the US Navy stationed aboard the destroyer USS Frank Knox. Their role during the Korean War was surveillance, radar and backup shore gunnery.  After departing the Navy, Wally enlisted for two tours as a Marine reservist.

Lacy Bethea enlisted in the Marines on October 4, 1946 and was a Gunnery Sergeant in charge of ammunition during Korea. Lacy is a member of “The Chosin Few” – the 30,000 United Nations troops encircled by 120,000 Chinese troops at the Chosin Reservoir.

Chuck Hudson is an Air Force Veteran and served with the 18th Fighter Wing toward the end of the Korean War. He went on to serve in Vietnam as well.

Wally is Chapter President for the Arizona Korean War Veterans Association. He discusses their support for “Bravo Base” a mini military encampment made up of homeless Veterans.  They recently secured the donation of a mini-van to provide transportation for the 30-35 residents of the encampment.

Lacy served with “Chesty” Puller, the most decorated Marine in US history. During the Battle of Chosin Reservoir, Puller said “We’ve been looking for the enemy for some time now. We’ve finally found him. We’re surrounded. That simplifies things.”  Lacy said that following their first battle with Chinese troops they sent a message back to headquarters and received a reply that the “No, the Chinese weren’t there”.  Lacy also shares what it was like fighting a 17 day pitched battle during the coldest winter in Korean memory.

Chuck recalls having a stove in the center of the tent. If one turned the stove up you risked burning the tent down but turning the stove down meant potentially freezing to death.

Takeaway:  “They may call it the Forgotten War but we sure as heck never forgot.”