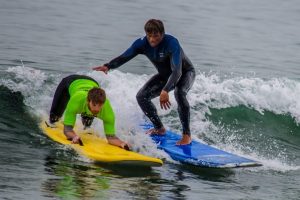 Operation Surf saved Bobby Lane’s life. Surfing saved Van Curaza’s life. Together, they are helping to rebuild and save other lives. Operation Surf is the subject of the award winning documentary “Resurface”.

Bobby said he wanted to serve with the best, so he became a Marine.  Serving in Iraq, his platoon suffered five roadside bomb attacks in the span of 11 days. Bobby was exposed to all of them but was so committed to the Corps he removed shrapnel from his arms and legs himself because he didn’t want to be sent home. 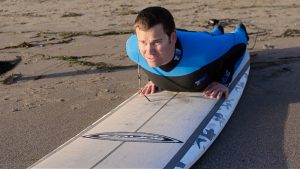 Bobby says “You go to war but the REAL war starts when you get home.” He was struggling.  His fellow employees feared him.  His family didn’t understand. Physicians prescribed medication – lots and lots of medication.

When offered the opportunity to participate in Operation Surf – something that had always been on his bucket list, he accepted. His plan was to check that box and then commit suicide. But he found peace in the ocean. Bobby is still trying to figure out how to transition but the surfing community has welcomed him with open arms.

Van Curaza, the President  & Founder of Amazing Surf Adventures, had a rough start in life. As he got older, lifestyle changes began taking him down the wrong road of alcohol and drug abuse.  The one thing that kept him in order was the idea that if he were arrested he would not be able to surf.  He has now been involved with the sport for over 40 years.  Because surfing helped him turn his life around, he began offering those experiences to young people and eventually Veterans.

Operation Surf is a free program that exposes Veterans and active duty military to the healing power of the ocean through adaptive surfing and supportive curriculum.  An in depth medical study showed a 35% decrease in PTSD symptoms and a 47% reduction in depression among Operation Surf participants.

Takeaway: “The VA kept giving Bobby meds to address his PTSD related nightmares, but after only three days on the ocean all he dreams about now is surfing.”