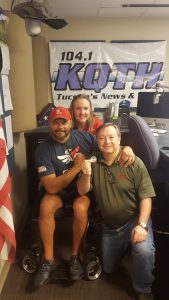 The Old Glory Relay honors the sacrifices of the thousands of men and women who have fought for America’s freedom and promotes the ideal of unity under the stars and stripes of the US Flag.  Volunteers with Team Red White and Blue are moving a flag 4,600 miles across the country. The relay began September 11th in Seattle and will conclude with arrival in Tampa on Veterans Day.

Marco DeLeon will be participating in the Tucson portion of the relay. Following the 9/11 attacks, Marco decided to join the military at the young age of 38. He was old enough to be the father of most his fellow recruits but felt that young persons should not be bearing the entire burden of this war.

He was assigned to the Arizona Army National Guard 180th Transportation Battalion and while deployed to Iraq, encountered a series of Improvised Explosive Device attacks that would cause severe spinal cord injuries.  His injuries were not readily apparent but after his return to the US, Marco gradually began to lose use of his legs.  He is currently confined to a wheelchair.

Together with his wife Diane, he was seeking help in dealing with the adjustment of returning to civilian life.  An internet search brought him to Team Red White and Blue. They were both attracted by the comraderies of others who might be dealing with the same rough transitions.

Diane is helping to organize the Tucson portion of the Old Glory Relay and Marco will be participating aboard his hand cycle.

Takeaway:  Marco said he wouldn’t want to go back. When he joined the military, he was searching for a way to make a difference. He believes his injuries have granted him the opportunity to fulfill that mission by inspiring others.