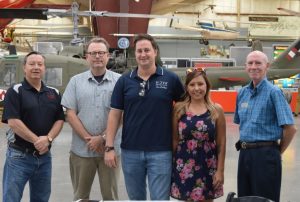 Pima hosts over 300 historical aircraft on 80 acres and in several hangars. Some of their more unique displays include an SR-71 Blackbird, a former Air Force One and many World War II, Korea and Vietnam era aircraft.  A big part of their mission includes education and they host regular programs for youth.

The second half of his tour he was selected for missions under the call sign “Prairie Fire”.  These involved Special Forces and indigenous personnel conducting small patrols along the Ho Chi Minh trail. “These guys were the true warriors; they were under fire from the minute they were inserted into the landing zone.” There were never more than 75 personnel in these ground groups and during 7 years of combat they were awarded five Medals of Honor. Everyone on these teams was wounded, some more than once. One of the personnel was on the run and under fire but when the FAC checked in with him he replied “I’ve got them right where I want them..surrounded from the inside!”

Takeaway: “It wasn’t the heavy caliber anti-aircraft I worried about, it was the smaller caliber rapid firing guns that could zip a wing off. And we were often pretty much down where they could throw rocks at us.”