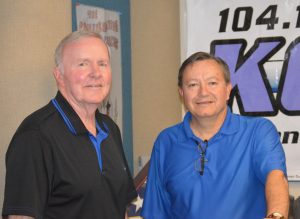 On September 11 Lt. General Thomas Keck was conducting an exercise at Barksdale AFB. Before long the President of the United States would be making an unannounced visit to his base.

As Commander of the 8th Air Force, Keck had just begun the Global Guardian exercise when a Captain handed him a note stating a plane had hit the World Trade Center. General Keck informed the Captain that all messages should begin with “Sir, this is an exercise message” to avoid confusion. But there was no mistake – in a few minutes a second plane hit the towers and Keck knew we were under attack and they converted to a “real” THREATCON Delta.

Keck called for fighter aircraft to protect his base. The nearest assets were reserve A-10’s that were put on alert to shoot down any unauthorized incoming aircraft. Thankfully, Keck never had to give THAT order but did receive a message about an incoming “Code Alpha” flight which turned out to be Air Force One with President Bush on board. They got President Bush situated and he delivered his September 11 address to the nation from Barksdale Air Force Base.

Keck also shared some experiences he had following September 11, including throwing out the first pitch at the Mets-Braves game and visiting ground zero.  Several retired firefighters still searching for remains had lost sons on September 11.  Keck had two Captains who had just returned from combat over Afghanistan as his escort. They presented the firefighters with arming lanyards from bombs released on those missions.

Tom is a member of “The Friday Pilots” and if it had wings, he flew it during his career; from A-10’s to B-2 bombers and even the SR-71 Blackbird.  He has 4600 flight hours, 886 flying B-52’s in combat over Vietnam. As an SR-71 pilot, he has literally flown faster than a speeding bullet. One mission from England to California, he landed before he took off. “You could make the sun rise in the west in an SR-71”.

TAKEAWAY: President Johnson was supposed to announce the name of our new spy plane as “RS-71” but he misspoke, calling it the SR-71.  The designation stuck.