A Flag for Every Pole – Charles Foley

A Flag for Every Pole – Charles Foley

As a Tucson Police officer, Charles Foley noticed 32 poles without a flag in one small downtown area.  Now he has made it his mission to assure that our national colors are available to every site that needs one.

In 2015, Foley co-founded “Flags for the Flagless” along with fellow police officer and 20 year army Veteran Bradley Clark.  So far, they have raised hundreds of donated flags at locations all across the USA. 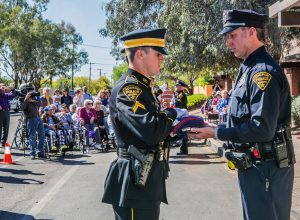 Foley’s first day on patrol as a police officer was September 11, 2001. He comes from a long line of Veterans and was inspired during a conversation with a retired NFL player who shared his commitment to volunteerism supporting The Greatest Generation Foundation.  Following that encounter, Foley wondered what more he could do for his community beyond serving as a police officer – all the buildings he saw on his patrols that were missing flags solidified the idea.

The first building to receive a flag had not flown one for years because the stairway leading to the flagpole on the roof had decayed. After hearing from Foley, the building owner built a new stairway so that they could raise a donated flag on Flag Day 2015. Another building had not flown the colors in over 75 years.

Flags are donated by various organizations and individuals, including family members of Veterans who donate their internment flags.  In addition to over 88 flags raised locally, Flags for the Flagless has also donated flags to schools damaged by hurricane Katrina and to New York area schools on the anniversary of 9/11. The organization presented a flag to the congregation of the South Carolina Emmanuel AME church as an expression of support from the citizens of Tucson.

Flag for the Flagless also makes presentations to various groups & school children about the importance of flying the flag and the proper rules for display. Anyone who would like to donate or knows of a location that needs support can contact Foley through their website.