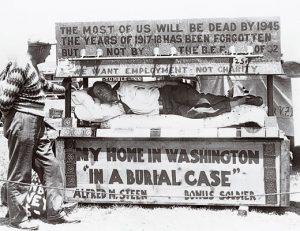 The Bonus Army was a term used to describe the tens of thousands of World War I Veterans who marched on Washington during the hot summer of 1932.

Veteran and Havok Journal Author Christopher Otero joins American Warrior Radio to share this often overlooked piece of history and how lessons of the past can provide lessons for the future.

Following World War I, Veterans could not rely on many of the protections available to service members today; the Veteran’s Administration, GI Bill or even employment protections when they went to war.

Despite President Calvin Coolidge’s statement that “..patriotism bought and paid for is not patriotism”, Congress overrode his veto to pass the “World War Adjusted Compensation Act” which provided WWI Veterans with a bonus of up to $500. ($6,835 in 2016 equivalent).  However, for most there was a catch – the funds were not collectable until 1945.

With many of their jobs taken and in the midst of the Great Depression, Veterans began pushing for earlier payment of the bonuses, culminating in a cross country march to Washington. By the time they set up their “Hooverville” camp in a swampy area across from the capital, their numbers had swelled to nearly 40,000 men, women and children. Their encampment looked like an invading army and hence the name Bonus Army.

They were well organized and peaceful until the US Attorney General moved to evict them. In the ensuing chaos, two Vets were shot and killed. Commanding infantry, cavalry and even six tanks, then Major Douglas MacArthur ran the marchers back to their tent city and then burned the camp.

Citizens were aghast and this attack on the Bonus Army is credited by many as a significant contributing factor in Hoover’s loss to Franklin Delano Roosevelt in the next election.  The next time the Veterans marched, Roosevelt sent his wife Eleanor to meet with the Vets. This resulted in a much more satisfying outcome when in 1936 Congress authorized immediate payments of $2 Billion in war bonuses.

The event also inspired many to not repeat the Bonus Army mistakes following World War II by establishing programs such as the GI Bill.