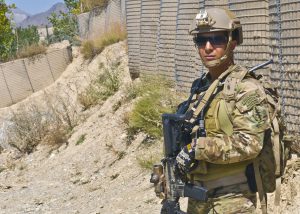 The discussion about women in combat my not have ended with the decision by Defense Secretary Ashton Carter in December.

Today’s guest has written “The debate on women in combat is an emotional one, filled with anger and vitriol across both sides of the aisle.”  Marshall McGurk is a WestPoint graduate who has also earned the coveted Ranger Tab and served as a Special Forces Detachment Commander in Afghanistan.

The nature of today’s warfare means the idea of women in combat is no longer a debate – they HAVE served in combat and continue to do so admirably. More than 150 have given the ultimate sacrifice in Iraq and Afghanistan alone. Our guest personally served with two women who were killed on raids supporting US Army Rangers.

We focus on the issue of women serving in the Special Forces.  Since Secretary Carter’s decision, female soldiers have completed Ranger Training and a New Mexico recruit has been one of the first to sign up for the infantry.  Other women are signing up for other Special Forces training.

We also discuss the practical biological realities that distinguish men & women and how that may impact the overall number of women who may qualify for those Military Occupational Specialties.  McGurk also shares his insights on things the various branches can do to assure that female soldiers are entering Special Forces training on a comparable footing to their male counterparts.

TAKEAWAY: Maintaining strict qualification standards are essential as they could mean the difference between life and death. But every person who meets those standards should be allowed to serve regardless of gender.