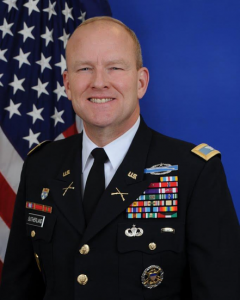 olonel David Sutherland is Co-Founder and Chairman of the Easter Seals Dixon Center for Military and Veterans services.  He is an Army Veteran who has led men in combat, earning a Purple Heart, Bronze Star with Oak Leaf Cluster and the Ranger Tab.  His last post was as Special Assistant to the Chairman of the Joint Chiefs of Staff and he also served as Director of the Warrior and Family Support Office at the Pentagon. It was in this role he worked with Roger Staubach to help establish the Allies In Service organization.

Col. Sutherland has a passion for supporting those who serve and their families and this led him to establish the Dixon Center along with Navy Veteran Kim Mitchell.  As an infant, Kim was rescued from her dead mother’s arms outside of Quang Tri.  She was adopted and came to the United States, eventually joined the Navy and retired at the rank of Lt. Commander.

The Dixon Center is changing the conversation about Veterans and military families to highlight their potential and create life-changing opportunities. They have produced a series of Public Service Announcements designed to encourage employers to consider the advantages of hiring veterans.  One PSA titled “What to Wear” stars comedian Rob Riggle (himself a Marine Veteran) and Air Force Veteran Brice Williams.  Brice calls in to share his perspective on transitioning from an Air Force career to a successful acting career.  Almost the entire cast and crew that produced the Dixon Center PSA’s are military veterans.

One of the best examples of the value of hiring veterans comes from an article Col. Sutherland wrote for Forbes magazine where he compares non-commissioned officers to persons holding an MBA degree.

TAKEAWAY: “The annual performance review in the civilian world is an everyday occurrence for a combat Veteran.”