Nate Boyer is the embodiment of the idea that anything can be achieved with the proper dedication and focused effort. 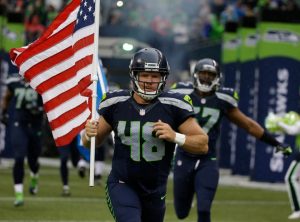 After high school, Nate decided to give a Hollywood a try but he didn’t feel like he really belonged.  When he read about the tragedies associated with the civil war in Sudan, he offered to volunteer. However, without a special skill set, none of the organizations working with refugees wanted him. So Nate bought a ticket anyway and faked his way onto a United Nations flight to Darfur.

He volunteered in the refugee camps for two months when he contracted malaria. While recovering he listened to a lot BBC radio. Upon hearing about what was happening in Iraq, he decided he wanted to help people in a different way. He joined the Army under the 18 X-Ray program, eventually earning the coveted Green Beret.

Nate Boyer was an athlete in high school but never played football. While deployed he decided it was time to address that regret. Despite never having played a down of organized football, he walked on at the University of Texas and earned a starting spot for three years. He transferred to the National Guard, playing football during the school year and deploying with the Green Berets in the summer. He even played one game in the NFL as the oldest rookie in the modern era.

Having worn both cleats and combat boots, Nate recognized the common challenges that military members and high level athletes face when they can no longer practice their craft. He co-founded Merging Vets and Players to bring the two communities together to help each other.

Nate returned to Hollywood, acting in several major motion pictures and even producing and directing the film “MVP” which depicts the founding of Merging Vets and Players.

TAKEAWAY: “I have been in both locker rooms. We both experience that loss of team when we transition out of uniform. It’s tough to transition forward.”