The P-51 Mustang changed the course of the air war in Europe, but it almost didn’t make it off the assembly line.  The story of the Mustang’s evolution and the pilots that flew it in combat is the subject of a great new book by David & Margaret White titled “ Wings of War; The World War II Fighter Plane That Saved the Allies and the Believers Who Made It Fly.” 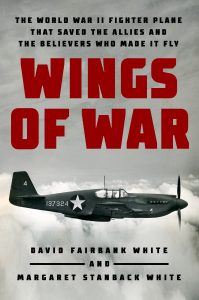 The genesis of the book is Margaret’s 103 year old father who served as a ground officer with the 20th Fighter Group in England and often regaled her with stories. David was already a published author so the two teamed up to write “Wings of War”.

The Mustang was originally developed for use by the British Royal Air Force but did not inspire interest among US Military leaders.  The story of the P-51 might have ended there were it not for Tommy Hitchock, a former WWI pilot who fought the bureaucracy as ferociously as the Mustang fought the Germans.  His advocacy for the aircraft was critical. Margaret shares that a certain level of bias against using a British manufactured engine in the Mustang was an issue. Outright corruption by Major General Bennett Myers also played a role in holding the Mustang back. Myers was eventually courts martialed.

When the nimble P-51 was introduced, it was able to outfly anything the Luftwaffe could put in the air. Most importantly, it had the fuel capacity to escort the bombers all the way to the heart of Germany and back.

We also discuss some of the very interesting pilots who flew the Mustang including Don Blakeslee. Blakeslee was such a fan of the Mustang that he told his commander he could have his pilots trained in 24 hours. Many of the pilots learned to fly the P-51 on their way to the target.

TAKEAWAY:  Pilot Joe Peterburs said “I’m nineteen years old. They gave me a plane with 2,000 horsepower and six 50 caliber machine guns and they said go have fun. I had fun!”